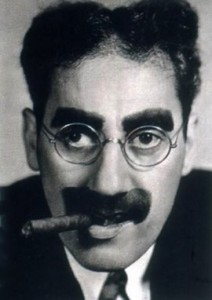 The St. Louis Post-Dispatch recently published a piece on Fred Firestone, a friend and St. Louis businessman who travels to New York City once a month to co-host with his daughter Jo an event that the newspaper states “is drawing critical acclaim from the New York media and attracting sellout crowds to a club in Brooklyn for their wild and crazy pun show called the Punderdome — New York’s Most Puntastic Competition.”

As near as I can tell, most folks either love ’em or hate ’em. Alfred Hitchcock was among the former, stating that “Puns are the highest form of literature.” Another defender, Edgar Allen Poe, claimed that “those who most dislike them are those who are least able to utter them.”

I suppose I’m an agnostic. I admit that even the groaners make me smile, such as the one on Halloween a few years back, when the young trick-or-treater asked me what Mr. Spock found in the toilet on the Starship Enterprise. The answer: the Captain’s log. And I suppose we can concede our amusement at learning that the butcher who backed into the meat grinder got a little behind in his work. Or that the soldier who survived mustard gas and pepper spray is now a seasoned veteran. But many puns make me wince, such as “zucchini” as the name for a two-piece swimsuit for animals.

Nevertheless, some of our legendary figures of art and literature have done impressive work in this realm. For example, Dorothy Parker, famous for her punning skills, was once challenged to make a pun out of “horticulture.” Her response: “You can lead a horticulture but you can’t make her think.”

And then there’s Groucho Marx, whose movies are brimming with wordplay. One example: “Last night I shot an elephant in my pajamas. How he got in my pajamas I’ll never know.”

And finally, of course, we have the Bard himself, whose love of puns apparently exasperated Samuel Johnson. Some of his puns were light-hearted, some more profound.  For an example of the latter, “Richard III” with the title character lamenting his brother’s ascension to the throne: “Now is the winter of our discontent/Made glorious summer by this sun of York.” Richard’s brother is Edward IV, and their late father was the Duke of York. “Son” and “sun” are homophones (words that sound the same). Edward is thus the “son” of the Duke of York but also the “sun” whose rise on the horizon is troubling Richard.

But most of Shakespeare’s puns are just fun, and many are R-rated. One good example occurs in Scene 2 of Act III of Hamlet. As the royal audience gathers for the staging of the Mousetrap, the famous play within the play, Hamlet spots Ophelia in the crowd. The following dialogue ensues, with a play on a slang term for vagina (and sex in general) that likely would have slipped right past the Elizabethan version of the FCC:

Unfortunately, my punning ability falls far short of the masters. I’ve even considered dropping by the fabric store to pick up some new material.

What about you? What are your favorites? Be creative. Be crazy. But remember: no matter how much you push the envelope, it’s still stationary.

The Unreliable Narrator and the Law