The creator behind every work of public art–from a painting to a novel to a play to a song–is just a person, and that person has a private life separate from the work art. Nevertheless, many of those artists haven’t been able to resist the temptation to stick something extremely personal into their public art–so personal, in fact, that unless someone tips you off, you might never know it was there.

One of the most famous–or perhaps infamous–examples is hidden in plain sight in Michelangelo’s The Last Judgement, his magnificent fresco on the altar wall of the Sistine Chapel. At the bottom right corner of the fresco is Minos, the king of hell. Michelangelo’s version of Minos, however, is actually a nasty caricature of his enemy Biagio da Cesena (a Vatican official who declared The Last Judgment unfit for sacred walls). As you can see, Michelangelo gave him donkey ears and wrapped him in a big serpent that’s nibbling on his penis. I like to imagine Michelangelo standing in front of his completed fresco, facing an outraged Cesena, and doing his own macho version of that “You talkin’ to me?” riff from Taxi Driver. For more on this personal touch to a famous work of public art, here is a fun piece by Roy Scarbrough.

Of course, some angry touches are more mysterious. A good example is the unnamed narcissist mocked by Carly Simon in her 1972 hit song, “You’re So Vain.” Indeed, the identity of her target has been the subject of so much speculation over the decades that “he” now has his own page on her website. 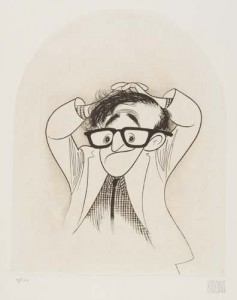 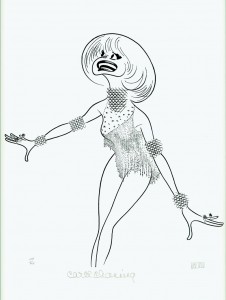 A far sweeter personal touch can be found (if you look carefully) in the works of Al Hirschfeld, the celebrated 20th-century caricaturist (and St. Louis native) best known for his black-and-white portraits of celebrities and Broadway stars. Hirschfeld cleverly snuck his beloved daughter Nina’s name into almost every one of his drawings. See if you can find her in Hirschfeld renderings of Carol Channing and Woody Allen on the left. (And check out the Leonard Nimoy at the top of this post.)

We novelists can–and do–have many opportunities for fun personal touches. Think of all those people and things to name in a novel. Friends of mine have their names on the letterheads of fictional law firms and in neon lights over restaurants. Some of my prior residential addresses have served as addresses of fictitious locations.

In my Rachel Gold novel Bearing Witness, there are five law students–Hanna, Jake, Josh, Zack, and Kayla– who volunteer to help Rachel sort through tens of thousands of documents dumped on her by the other side in a lawsuit. Those five students just happen to have the same names as my five children, and each of those students bears a striking resemblance to the child he or she is named after.

In the final poignant scene in my novel The Mourning Sexton (written under the pen name Michael Baron), our protagonist David Hirsch steps up to the bima at his synagogue to lead the congregation in the mourner’s Kaddish, which is preceded by a recitation of the names of, among others, those who died during the same time in prior years. Among the names David reads aloud to the congregation (and the reader) are beloved members of my family and my wife’s family.

Sometime we forget completely about a personal touch we inserted at, say, page 92 of the manuscript by the time we finish the 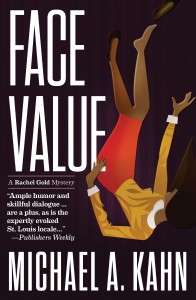 novel ten months and 300 pages later. So it happened with my latest novel, Face Value. I received a call a week ago from Dennis Lubeck, one of my favorite teachers back at University City High School more than forty years ago. He called to tell me how much fun he was having showing friends page 92 of my novel. I thanked Dennis, of course, but realized that I had no recollection of what was on that page and why it gave him such pleasure. When the call ended, I pulled the book down from the shelf and opened to page 92. There, in a paragraph describing Donald Warner, one of the name partners of the law firm of Warner & Olsen, I found this passage:

And while Donald Warner would not likely ever generate the same level of affection that you may have had for, say, your favorite high school teacher, you called him Mister Warner for the some of the same reasons you called your teacher Mister Lubeck. It just felt more natural.

The Crime of the Century? Which One?