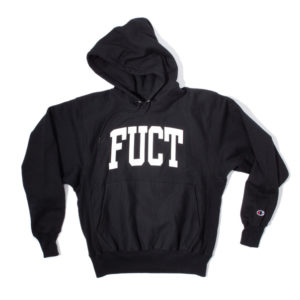 Yes, you are looking at the one-word trademark whose registration dispute eventually reached the United States Supreme Court. The U.S. Patent and Trademark Office had refused to register the FUCT trademark for apparel. The ground for refusal? Section 2(a) of the Lanham Act, which prohibited the registration of trademarks that were immoral or scandalous. Erik Brunetti, the applicant, refused to give up, and the matter eventually reached the Supreme Court, where the issue was whether that immoral/scandalous prohibition violated the First Amendment.  I eventually wrote a blog post for my law firm on that crazy case, which the Supreme Court resolved in the summer of 2019.

Well, I confess I hadn’t thought about that case or that trademark for more than two years until I found myself at a traffic light, idling behind a Honda Civic displaying an X-rated bumper sticker. And thus the catalyst for another blog post for my law firm, which you can read here.

In this new world of Trigger Warnings, however, I warn you that there are some words–indeed, some trademarks–mentioned in this post that you can’t say on the radio. Enjoy.