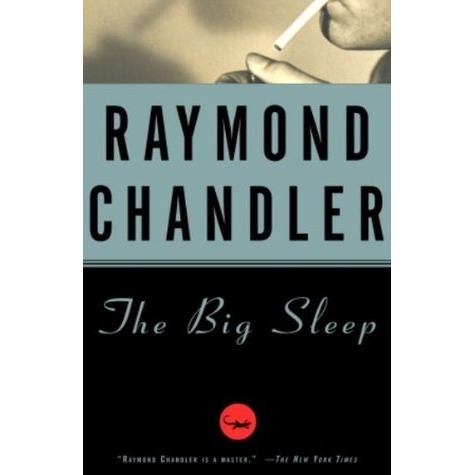 In this series of posts I discuss my five favorite fictional narrators. My first narrator, discussed last time, was Huck Finn. On to number 2:

Marlowe is a fascinating collection of seemingly contradictory traits: he is a wise-cracking, hard-drinking, tough private eye who happens to enjoy poetry and chess. And he possesses a distinctive and captivating voice that is at the core a series of novels that include The Big Sleep, The Long Goodbye, and Farewell, My Lovely. Although the plots in many of Chandler’s novels could charitably be described as disjointed, our tour guide’s enchanting voice helps bridge the gaps. Here are some of my favorite examples of that voice:

And here is an opening paragraphs (from the short story “Red Wind”)–an opening paragraph to make an author kick a hole in a stained-glass window:: “There was a desert wind blowing that night. It was one of those hot dry Santa Ana’s that come down through the mountain passes and curl your hair and make your nerves jump and your skin itch. On nights like that every booze party ends in a fight. Meek little wives feel the edge of the carving knife and study their husbands’ necks. Anything can happen. You can even get a full glass of beer at a cocktail lounge.”

I end with this passage from Farewell, My Lovely, which perfectly captures our hero and his voice: “I needed a drink, I needed a lot of life insurance, I needed a vacation, I needed a home in the country. What I had was a coat, a hat and a gun. I put them on and went out of the room.”

Ah, Marlowe. You had me at hello.