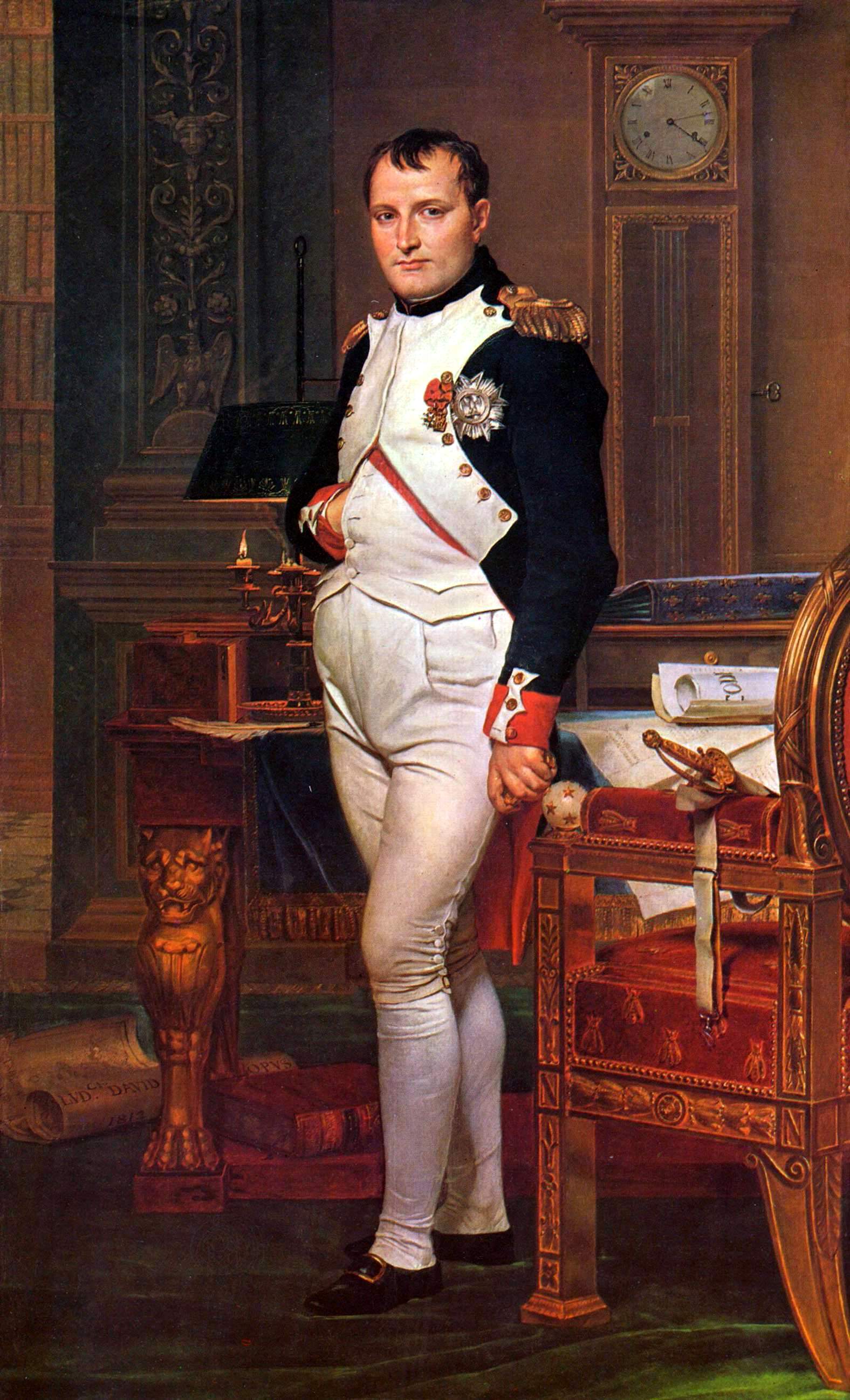 The answer: absolutely. And yes, I know where you focused on that painting of Napoleon.

But before we take a closer look at that titular appendage, we need to understand the MacGuffin and its key role in many of your favorite books and movies.

So what is a MacGuffin? Coined by master filmmaker Alfred Hitchcock, it is a valued plot device for authors of all types of fiction, from novels to screenplays to dramas. It’s typically introduced early in the work and acts as the catalyst to set the characters in motion and drive the story. Hitchcock described the MacGuffin as “the thing that the characters on the screen worry about but the audience doesn’t care about.” Well, yes and no. The perfect example of a Hitchcock MacGuffin is the movie Psycho, where most of us have forgotten the plot device–namely, the stolen money that motivates all of the actions of Marion Crane (Janet Leigh)–long before that horrifying scene when she steps into the shower, now considered one of the most famous scenes in cinema history. Another example: the letters of transit in the motion picture Casablanca. They serve as the MacGuffin for that movie, though few of us remember them after the closing credits.

But some MacGuffins are more memorable than others–and they tend to stick with each of us long after we close the novel or leave the movie theater.

Consider Citizen Kane. The MacGuffin in that celebrated film is Rosebud, which is the murmured dying word of newspaper tycoon Charles Foster Kane. The film follows a reporter’s efforts to uncover the significance of that word. His search ends in frustration when he concludes that he can’t solve the mystery and thus the meaning of Kane’s last word will remain an enigma. But then comes the movie’s final scene:

We are back at Kane’s mansion. The staff is busy cataloging or discarding the dead man’s belongings. They come upon a sled–the same one on which the innocent eight-year-old Kane was playing on the day his bank-trustee-appointed guardian came to take him away from home to prepare for his lonely new life as an American oligarch. The staff worker, deeming the sled junk, throws it into the furnace. As the sled burns, the camera zooms in to reveal its trade name: “Rosebud.” Without that dying word, no plot, no movie, and certainly no sympathy for the dead man.

Another famous MacGuffin is the statuette of a falcon in the 1929 detective novel The Maltese Falcon by Dashiell Hammett. Sam Spade, the private investigator (played by Humphrey Bogart in the movie version) is hired to find the statuette, which legend claims is made of gold and precious gems covered by black enamel. (Ironically, the subsequent fate of the Maltese Falcon movie prop–a piece of Hollywood memorabilia right up there with Dorothy’s ruby slippers–morphed into a complex and lucrative real-world MacGuffin, as reported by Bryan Burrough in Vanity Fair here.)

And then there is that Persian rug in the the 1998 crime comedy The Big Lebowski. Yes, the rug that “really tied the room together.” It also ties the movie together. Jeffrey “The Dude” Lebowski (Jeff Bridges) is assaulted in his apartment by two goons who have mistaken him for another Jeffrey Lebowski. Realizing their mistake, the goons leave, but not before one of them urinates on his rug. Outraged, the Dude seeks compensation from the other Lebowski, a wealthy philanthropist who refuses his request, thus setting the entire plot in motion. Without that rug, no movie.

While a missing object is a frequent MacGuffin, occasionally–especially in mystery novels and movies–the MacGuffin will be a missing person. One such mystery is Joseph Conrad’s Heart of Darkness, where the MacGuffin is Mr. Kurtz, the inscrutable ivory trader operating out of a station somewhere far up the Congo River in Africa. The novella is the narrator’s tale of trying to find Kurtz. Eight decades later, Francis Ford Coppola directed Apocalypse Now, an updated version of Heart of Darkness set during the Vietnam War. A U.S. Army officer (played by Martin Sheen) is placed on the trail of Colonel Walter E. Kurtz, a rogue U.S. Army Special Forces officer who’s gone insane and established himself as a demigod in the jungles of Cambodia. Although Marlon Brando’s portrayal of Kurtz is spellbinding, he actually spends little time on the screen, instead serving as the unseen MacGuffin propelling Sheen’s character and his troops forward in their journey into the heart of darkness of the war-ravaged region. (By the way, the name of the detective narrator in Heart of Darkness is Marlow. The name of the detective narrator in the Raymond Chandler mystery novels is Marlowe. Coincidence? Like Conrad’s Marlow, Chandler’s Marlowe finds missing persons.)

In my first novel, Grave Designs, I unwittingly created a MacGuffin years before I had heard of that term or its significance. The MacGuffin in Grave Designs is a coffin stolen from a grave in a pet cemetery. That burial plot had been endowed with a large trust fund for its care and maintenance—a trust fund secretly established by a powerful partner in a major law firm. The partner has died, and his law firm is confused to discover the trust fund, especially since neither the partner nor his family ever owned a pet. The firm retains attorney Rachel Gold to figure out what was in that grave, and shortly thereafter the grave is robbed. Rachel’s search for that stolen coffin and its mysterious contents propels the novel’s plot.

And then there are MacGuffins in the form of works of art. Back at the time of the release of my novel The Sirena Quest, an interviewer asked me to describe the book in 12 words or less. A long pause, a silent word count, a smile, and then the answer: “A Baby Boomer version of ‘The Big Chill’ meets ‘The Maltese Falcon.’” It was only later, as I thought about my answer, that I realized that an art object—stolen or otherwise missing—serves as the MacGuffin for so many literary works, from Donna Tartt’s The Goldfinch, winner of the 2014 Pulitzer Prize for Fiction, to Wilkie Collins’ 19th-century masterpiece, The Moonstone, and so on all the way back to those Arthurian tales of quests to find the Holy Grail. My Holy Grail is Sirena, a legendary Greco-Roman statue of a young goddess that mysteriously disappeared from my protagonists’ college 35 years ago.

Which, at last, brings us back to Napoleon’s penis. The Emperor’s member was not famous during his lifetime, at least based on my review of his biographies. There have, of course, been genuinely famous penises, but mostly in the 20th Century, where they became a topic of gossip (such as the purported endowments of the comedian Milton Berle and the singer Frank Sinatra) or of video display (see, e.g., porn stars John Holmes and Ron Jeremy. I’ll let you conduct the NSFW Google search for those two). But, alas, even famous penises tend to enter the grave attached to their owners.

Not so with Napoleon’s. According to legend, his penis was removed during his autopsy in 1821 and initially claimed by his chaplain, Abbé Ange Vignali. From there, it embarked on a journey from owner to owner across Europe and eventually the Atlantic Ocean. When its owners put it up for auction in 1916, the catalog chastely described it as “a mummified tendon taken from Napoleon Bonaparte’s body during post-mortem.” It was allegedly last purchased in 1969 by a Columbia University professor of medicine. Alas, there is little aesthetic appeal to that object, which Time magazine described as “looking like a maltreated strip of buckskin shoelace or a shriveled eel.” For more on the weird history of that “shriveled eel,” visit the Wonders and Marvels website, where you can read “The Strange Journey of Napoleon’s Penis” by Karen Abbott.

Among other things, Monsier Bonaparte’s “object of art” inspired the plot of my second Rachel Gold novel, Death Benefits, While Napoleon’s penis makes no appearance, you will quickly discern its, er, seminal contribution to the mystery at the core of the novel.

But meanwhile, Napoleon’s penis remains the proverbial low-hanging fruit for some budding mystery novelist looking for a MacGuffin to power his novel. I have no idea where that penis is today–or whether it still exists–or even whether that “shriveled eel” is in fact the mummified remains of Napoleon’s little fellow. But we’re talking fiction here. There are also reports of Rasputin’s preserved member. Or you can just invent another famous one. Such as, perhaps, an appendage known in certain circles as the original Lincoln Log. Or perhaps Gustave Eiffel’s Tower. Or, or course, Scarface’s Little Friend. Think of all those possibilities! Be sure to make it a collector’s item. Worth millions. After all, if the Maltese Falcon movie prop could sell at auction for more than $4 million, think what a famous historical figure’s preserved member would be worth. And its sudden disappearance would certain get a plot rolling. There you go. Have fun!