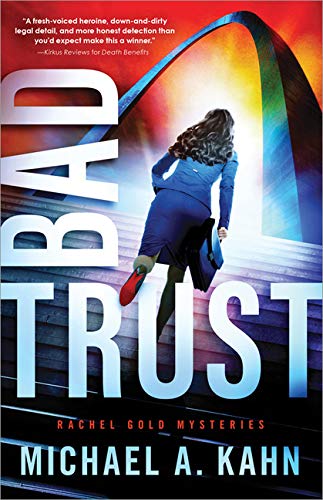 One of the unexpected joys of writing a mystery series–or any series–is getting to spend more time with your main characters and, in the process, learning more about them. Such has been true with my Rachel Gold series, with has now reached #11 with the recent publication of Bad Trust.

Over the past several novels, I have become totally enchanted with Rachel’s mother Sarah. Indeed, she is now my favorite fictional Jewish mother of all time. A widow in her sixties, Sarah Gold speaks her mind on any topic and without inhibition. For example, she is apparently the subject of the amorous fantasies of many of the elderly men who work out at the Jewish Community Center at the same time she does. As Rachel explains in my new novel:

Though she recently turned sixty-six, my mother still looks terrific. She works out three days a week in the Fitness Center at the Jewish Community Center—and apparently the arrival of the red-headed Sarah Gold is eagerly anticipated by the older men. They flirt while she’s on the StairMaster and vie for position on the treadmill next to hers. Just last week my mother remarked that there should be a special place in Hell for whoever invented Viagra. I try not to think about the implications of that statement.

Rachel and her mother have a special loving relationship, as best exemplified by what she did after Rachel’s husband Jonathan died in a plane crash, leaving Rachel with two step-daughters and her little son Sam. As Rachel explains: “My mother lives about thirty steps from my back door. More precisely, she lives in the renovated coach house behind my house. After my husband Jonathan died, my mother sold her condo and, God bless her, moved in to help me raise Sam and my two stepdaughters, Leah and Sarah.”

Which is not suggest that Sarah is some mild-mannered timid granny.

Although my two step-daughters call me Rachel, they call my mother Baba, which is Yiddish for grandmother. Their Baba is hard-headed and opinionated and sets lofty standards for her grandchildren. Don’t ask the two girls how many times their red-headed Baba made them rewrite their college application essays. Though she can exasperate me like no other human on the face of the earth, we all adore her—and the “we” definitely includes Benny.

Nothing captures the essence of Sarah Gold more than her questions regarding Rachel’s relationship with the man Sarah fixed her up with: Abe Rosen, a tall, handsome Jewish doctor (of course) and a divorced father of two. Abe’s and Rachel’s children attend the same religious school on Saturday mornings, and the two of them meet for coffee while their kids are in class. Rachel (herself a widow) and Abe (recently divorced) have decided to take it slow. Too slow for Rachel’s mother, who interrogates her daughter as follows one evening after dinner:

My mother leaned back in her chair. “So?”
I frowned. “So what?”
She gave me one of her knowing smiles. “You and Abe.”
“What about me and Abe?”
“Are you two finally shtupping?”
“Mom, what kind of question is that?”
“One a mother should ask of her daughter, that’s what kind.”
I rolled my eyes and shook my head. “Really?”
“Yes, really. I know that a girl shouldn’t be opening her legs on a first date but come on now. How long have you two lovebirds been dating? A big virile man like that, well, I shouldn’t have to remind you, Rachel, a man’s got needs.”
“So do I, Mom. But that’s not the point. Abe and I are taking this slow. We both agreed.”
“Slow for how long?”
“I don’t know. We’re fine with it. I promise. Okay?”
“Okay, Doll Baby. But remember what that Ecclesiastes fellow said.”
“Huh?”
“There’s a time for everything under the sun. There’s a time to plant and a time to harvest what was planted. Right?”
I gave her a look, “Okay.”
“And you know what else? There’s a time to meet for a cup of coffee, and then there’s a time to say enough already with this coffee.”
I shook my head. “Oy.”