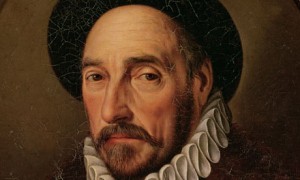 As I skim through my various posts this year, I’ve noticed a pattern: a fascination with literary evidence that confirms the prophecy of Ecclesiastes: “What has been will be again, what has been done will be done again; there is nothing new under the sun.” Or, stated differently, all those literary devices you think are so cool and au couranthave actually been around for hundreds and hundreds of years.

As I discussed in one post, the most celebrated works of meta-fiction–that quintessential post-modern form of literature–pale in comparison to what Miguel de Cervantes accomplished five centuries ago in his meta-fiction masterpiece, Don Quixote. So, too, as I explored in another post, the concept of the “unreliable narrator” predates its contemporary hipster practitioners by at least seven hundred years, as exemplified by two of the narrators in The Canterbury Tales.

Thus it should come as no surprise that Michel de Montaigne (1553 – 1592), the inventor of the “personal essay, fills his pages with observations about himself, his neighbors, and society that are as relevant today as when he wrote them back before Shakespeare’s time. I have been happily working my way through those essays. Along the way I have dog-eared so many pages that I can no longer find my way back to a specific observation or quote that made me want to fold over the corner of that particular page. For example, here is one I used as the introductory quote for a section of my novel The Mourning Sexton: “On the highest throne in the world, we still sit only on our own bottom.”

Pick your topic, and Montaigne will offer insights and observations that will make you smile or nod in agreement or both.

On the topic of sex, Montaigne’s many witty observations includes this one on his own penis: “We are right to note the license and disobedience of this member which thrusts itself forward too inopportunely when we do not want it to, and which so inopportunely lets us down when we most need it; it imperiously contests for authority with our will: it stubbornly and proudly refuses all our incitements, both of the mind and hand.”

Somewhat more profound thoughts on marriage, women and sexual pleasure can be found in this oddly titled essay, “Upon Some Verses of Virgil.” Here is a link to it.

Just as intriguing to me were his thoughts on the use of torture to obtain information from prisoners of war. Given the debate in our country over water boarding and other methods of interrogation by torture, Montaigne’s musings on the subject (in the essay “On Conscience”) seem as relevant today as they did when he wrote them back in the 1500s.

Indeed, you could literally copy and paste excerpts from that essay into an op-ed piece for your town’s newspaper. Not too shabby for a guy who died in 1592.

A Review and Interview in Kings River Life Magazine

The Flinch Factor Event at the St. Louis County Library