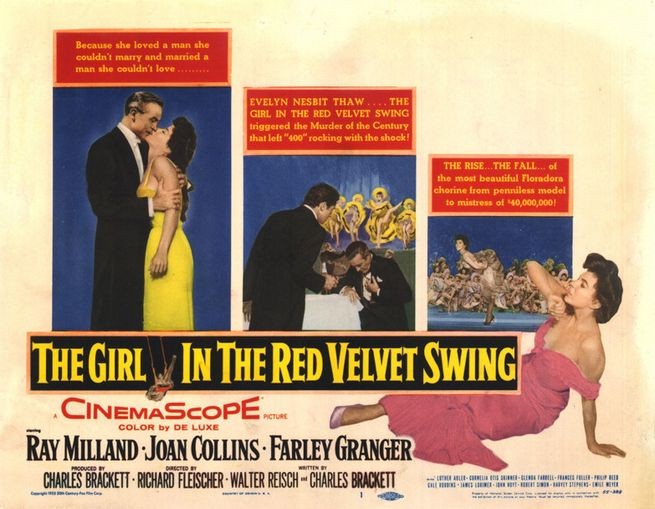 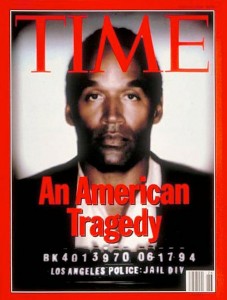 As a trial lawyer by day and a writer of legal thrillers and mysteries by night, I have long been fascinated with the so-called “headline trials”–both the ones that take place in real courtrooms and those that unfold in fictional ones. After all, the most famous lawyer of the 20th Century remains Perry Mason.

As for the ones in the real courtrooms, the philosopher George Santayana famously wrote, “Those who cannot remember the past are condemned to repeat it.”A variation on that quote came to mind as I was preparing to write a review of the book The Twelfth Victim for publication in The Common Reader.  Specifically, to paraphrase Santayana, those who cannot remember the prior Trial of the Century are condemned to give that label to the next one.

The focus of The Twelfth Victim–the Starkweather Murder Rampage–is a good example. The media circus around that 1958 “Crime of the Century” guaranteed that most Americans of that era knew all the players and key facts involved in that grisly murder spree across Nebraska and Wyoming. But just a half-century later, the details of that “Trial of the Century” are as little known to us as were the details of the Leopold and Loeb trial to most Americans in the 1950s.

Every generation, indeed, every decade, has had at least one Trial of the Century. For my fellow Baby Boomers, the Trial of the Century is, of course, the O.J. Simpson case, which involved the prosecution of the former football star and actor on two counts of murder for the gruesome stabbings of his ex-wife Nicole Brown Simpson and Ron Goldman on the front steps of her condo. Beamed into millions of homes on television from opening statements in January 1995 through the controversial Not Guilty verdicts ten months later, the trial generated virtually nonstop media coverage. We Boomers may not recall the name of the Supreme Court Justice who wrote the landmark opinion in Brown v. Board of Education, but we all know that the presiding judge at our Trial of the Century was Lance Ito.

And thus it pains us Boomers to realize that our children, and definitely our grandchildren, will know as little of the juicy details of the O.J. Simpson case as we do of the Roscoe “Fatty” Arbuckle case, which mesmerized the nation during the early 1920s. Indeed, perhaps the most sensational trial of that decade—whose newspaper coverage exceeded even that of the Titanic disaster and whose courtroom spectators including a daily carousel of international celebrities—was known to an enthralled nation as the Sash Weight Murder Trial and is today unknown unless you’ve read Bill Bryce’s fascinating account of the crime in his book One Summer: American, 1927. 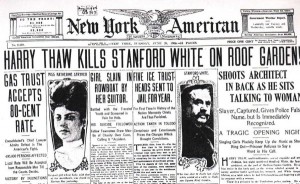 Even more startling was my discovery that the first Trial of the Century, and perhaps the one trial most deserving of that title, took place in 1907. Indeed, if gauged by the quantum of scandal, sex, fame, wealth, and flagrancy, the O.J. Simpson trial pales next to the Thaw murder trial. Harry Thaw, the scion of a wealthy and prominent family, drew his pistol in the crowded rooftop theater of Madison Square Garden, and, in a jealous rage, fatally shot the celebrated architect Stanford White over White’s alleged corruption of Thaw’s wife Evelyn, nicknamed by the press as “The Girl in the Red Velvet Swing,” which later became the name of the 1955 motion picture of those events, with Joan Collins in the title role.

And so it goes–at least in the real world. Murder cases that were crowned the Trial of the Century in earlier decades are today as obscure as many of the literary figures crowned during that same era with the Nobel Prize for Literature. Those former literary titans include Sully Prudhomme, Rudolph Eucken, Romain Rolland, and Henri Bergson.

If it’s any solace to lovers of the fictional courtroom thriller, some of our literary forbears have created Trials of the Century that have retained their dramatic power and cultural significance decades, and even centuries, later. I’ve even written a law review article on the subject entitled “From Shylock to Billy Budd: The Literary ‘Headline Trial.‘”

Indeed, the trial in Act IV of The Merchant of Venice, where Shylock comes to court seeking to enforce the pound-of-flesh promissory note signed by the merchant of the play’s title, has long been recognized as one of the most dramatic scenes in all of Shakespeare. And when it comes to 20th century trial lawyers, the monumental figure of Atticus Finch (of Harper Lee’s great novel To Kill a Mockingbird) far outshines the entire crew of defense lawyers comprising O.J. Simpson’s Dream Team, one of whose members–the late Robert Kardashian–has now been eclipsed by his daughters of reality TV infamy. Try putting that ironic morsel in a novel and your editor would reject it as totally lacking credibility.