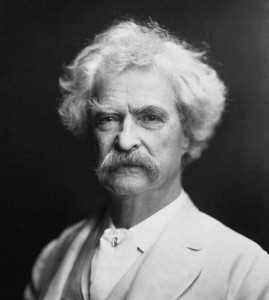 Herman Melville starts Moby Dick with the concise but enigmatic “Call me Ishmael.”

Hmm . . . not your real name, eh? Why do want us to call you Ishmael? The Biblical Ishmael? Why him?

By contrast, Mark Twain’s greatest work, Huckleberry Finn,  itself a departure from all prior American literature, makes that clear from the start: “You don’t know me without you have read a book by the name of The Adventures of Tom Sawyer, but that ain’t no matter. That book was made by Mr. Mark Twain and he told the truth, mainly. There was things which he stretched, but mainly he told the truth.”

Read that passage again, but slower this time, and consider what’s happening in that first paragraph. We have a fictional narrator who knows the actual author, has in fact read the author’s prior novel, is familiar enough with the events in that novel to spot the inaccuracies, and is now writing his own story, apparently without a copy editor (and thus the “ain’t” and the grammatical errors). This is meta-fiction decades before it was “invented.”

In more ways than one, Ernest Hemingway was right when he wrote, “All modern American literature comes from one book by Mark Twain called Huckleberry Finn.” As Mark Twain demonstrates in that magical first paragraph, the great pick-up line lures you into the second sentence, which pulls you into the third, and before you know it you’ve reached Chapter Two. That is the art of seduction.

What is my favorite opening paragraph in modern American letters? Not even close. Turn to page one of Fear and Loathing in Las Vegas, which works the same way as the opening paragraph of Huckleberry Finn. The first sentence pulls you into the next, and by the end of that first paragraph you just have to read the next paragraph. Here it is:

“We were somewhere around Barstow on the edge of the desert when the drugs began to take hold. I remember saying something like ‘I feel a bit lightheaded; maybe you should drive….’ And suddenly there was a terrible roar all around us and the sky was full of what looked like huge bats, all swooping and screeching and diving around the car, which was going about a hundred miles an hour with the top down to Las Vegas. And a voice was screaming “Holy Jesus! What are these goddamn animals?”