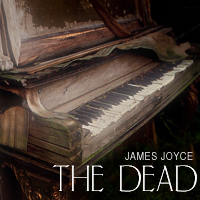 Sometimes we revisit a beloved book or movie many years later only to discover that what had once seemed so magnificent now seems, well, kind of meh. Such was the case for me with the novel Catcher in the Rye and the movie Bringing Up Baby. Oh, there were wonderful moments in each, but nothing that came close to matching my glorious memories of them.

Sometimes, though, the opposite occurs: we revisit a work of art that had once seemed, well, pretty good but now, years later, has become a masterpiece. Such is the case with James Joyce’s story, “The Dead,” which I revisited via audio book on our annual summer vacation drive from St. Louis to the Michigan shoreline.  If you haven’t read it recently, I urge you to do so. First published in 1914 as the final story in Joyce’s The Dubliners, and now generally recognized as a great, if not the greatest, story of the 20th century, you can download it for free in various places, including here.

For those who don’t recall or haven’t read it, the story takes place in Dublin in 1904 at a holiday party given by two elderly sisters, Kate and Julia Morkan, and their unmarried niece, Mary Jane. The guests arrive, we observe them as they observe one another and we listen to them talk. Among the guests are the aunts’ favorite nephew, Gabriel Conroy, and his wife, Gretta. At the end of the long evening, after Gabriel has given his annual holiday toast to the gathering, he and Gretta go to the hotel where they will spend the night before going home to a far suburb in the morning.

I warn you that up until they reach their hotel, the story will seem almost mundane. Indeed, by then you may be asking yourself what the hell was Kahn smoking when he recommended this?

Trust me. Read on.

As they approach the hotel, all Gabriel can think about is making love to Gretta. But in the hotel room he grows irritated by her distant demeanor. She clearly has no interest in sex, and in fact bursts into tears. She confesses that she has been thinking of the final song from the party because a former lover had sung it to her in her youth in Galway. Gretta recounts the sad story of her first love, a boy named Michael Furey, who died of an illness after waiting outside of her window in the cold.

Gretta eventually falls asleep, but Gabriel remains awake, deeply disturbed by what he has learned about his wife–and, more important, about himself.

The final paragraphs of the story are among the most profound and poignant paragraphs in all of literature. I will resist the temptation to quote them here because you won’t feel their magic without first reading all that comes before them.

Next on my bucket list is to re-watch the movie version, directed by the great John Huston just before his death. Indeed, Huston apparently said on many occasions that “The Dead” was the one work of literature he wanted to film before he died. He cast his daughter Angelica in the role of Gretta, and she is magnificent.

I have wonderful memories of the film, which I was glad to see confirmed by the late Roger Ebert in this review and by the New York Times’ Vincent Canby in this review. I can’t wait to see it again.