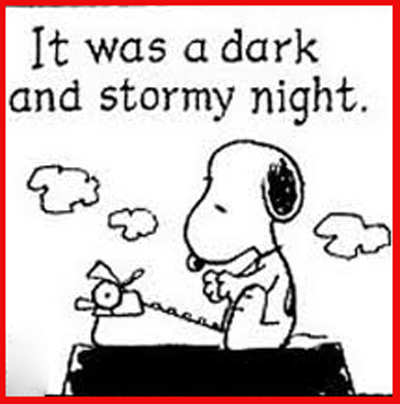 My last two posts were salutes to the greatest pick-up lines in literature–those magical opening sentences that lure you into the novel. As in a singles bar, the best pick-up lines in novels feature a surprise twist at the end. George Orwell understood that rule in crafting the opener to his novel Nineteen Eighty-Four: “It was a bright cold day in June, and the clocks were striking thirteen.”

But bad opening lines, like bad pick-up lines, can become the stuff of legend. Snoopy starts each of his doghouse novels with the opening seven words from Edward Bulwer-Lytton’s 1830 novel Paul Clifford: “It was a dark and stormy night.”

I’m not sure what turned that opener into such a groaner–after all, more than a century later those same seven words opened Madeline L’Engle’s beloved A Wrinkle in Time–but Snoopy was not the only one inspired to poke fun at them. San Jose State’s annual Bulwer-Lytton Fiction Contest asks entrants to compose a bad opening sentence to an imaginary novel. My all-time favorite: “Just beyond the Narrows, the river widens.”  My second favorite: “As a scientist, Throckmorton knew that if he were ever to break wind in the echo chamber he would never hear the end of it.”

And for those of us in the crime novel genre, I salute Steve Lynch of San Marcos, California, who won in the Detective Fiction category in 2011 with this “homage” to Raymond Chandler: “She walked into my office wearing a body that would make a man write bad checks, but in this paperless age you would first have to obtain her ABA Routing Transit Number and Account Number and then disable your own Overdraft Protection in order to do so.”

But the beauty of opening lines, like beauty in general, is in the eye of the beholder. Earlier this year, an outfit called the American Book Review published its list of the 100 best first lines in literature. Not so fast, responded Andrea Harris, the witty voice behind the wonderful blog The Twisted Spinster, where she offers her own take on those Top 100. Enjoy.