Our focus today: The Maltese Falcon. The supposed last line of the movie version invariably makes those lists of Top Ten Greatest Closing Lines: “The stuff that dreams are made of.” Except that isn’t the closing line. And, moreover, that quote is missing a small but important word.

But first the author: Dashiell Hammett. Over the course of the half century since his death in 1961, Hammett’s literary reputation has grown from being “the dean of the hard-boiled school of detective fiction” (according to his New York Times obituary) to having Time magazine include his 1929 novel Red Harvest on its list of 100 best English-language novels published since 1923 to having all five of his novels collected and published in the esteemed Library of America edition.

Hammett’s best known novel, The Maltese Falcon, was published in 1930. A decade later, Warner Bros. turned it into a major motion picture with Humphrey Bogart in the lead as the private eye Sam Spade.

Hammett was the master of the noir mystery genre, as he makes clear in the opening paragraph, which is a description of Sam Spade’s face as a series of V shapes, from his jaw to his mouth to his hooked nose to the the pale brown hair that grew down “from high flat temples in a point on his forehead.” The paragraph ends: “He looked rather pleasantly like a blond satan.”

Both the novel and the movie begin with Spade and his partner, Miles Archer, being hired by the beautiful “Miss Wonderly” to follow one Floyd Thursby, who has allegedly run off with Wonderly’s younger sister. By the end of the night, Archer and Thursby are both dead. Spade discovers that Wonderly’s real name is Brigid O’Shaughnessy, that she never had a sister, and that Thursby was an acquaintance who betrayed her. And to add another layer of complexity, Spade was having an affair with Archer’s wife Ida, who believes Spade killed her husband. 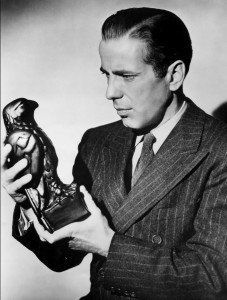 Before long, Spade is involved in the hunt for the the mysterious figurine of a black falcon. According to Casper Gutman, one searcher who has been on the trail for 17 years, the figurine was originally a gift from the Knights of Malta to the King of Spain but was lost in transit. Covered with a fortune’s worth of diamonds and other jewels, the Maltese Falcon acquired a layer of black enamel to conceal its value.

Hammett ends the novel a dark note. The case has concluded, the figurine recovered. Sam Spade returns to his office the next day, where his loyal secretary Effie Perine is reading the newspaper account of her boss’s exploits. She is clearly disturbed by his callous betrayal of Brigid O’Shaughnessy.  This Effie is a far cry from the one we met in the opening chapter–the cheerful one who looked up to her boss as a shining knight. She has lost her innocence.

The book ends with Sam seated behind his desk. Effie announces “in a small flat voice” that “Iva is here.” The final lines:

Spade, looking at his desk, nodded almost imperceptibly. “Yes,” he said, and shivered. “Well, send her in.” 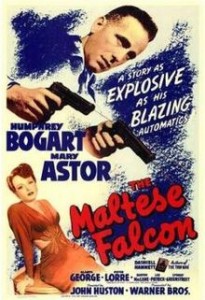 The movie ends the prior night. After Brigid has been led out of the apartment by the cops, the police sergeant lifts up the black figurine. “It’s heavy,” he says. “What is it?”

Spade grimly answers: “The, uh, stuff that dreams are made of.” Invariably, the quoted version omits the “uh.” Seemingly no big deal, until you watch the scene itself and catch the nuance in Bogart’s delivery.

The actual final line of the movie is the sergeant’s response to Spade’s grandiose statement:“Huh?”

Spade, figurine in hand, then heads out the apartment door. He pauses as the cops walk Brigid into the elevator. She turns, tears on her cheeks. The elevator cage closes, the elevator door slides shut,  and the movie closes on Spade walking down the stairs and out of view. The scene’s power–including the subtle “uh” and the humorous “Huh?”–needs to be viewed to be fully appreciated. Enjoy!