Following up on my last post, here is a look at the closing scene of the second of three classic Hollywood movies and the closing lines of the novel on which it is based.

While almost all of us have seen and can even recite lines from the 1939 MGM motion picture musical, The Wizard of Oz, our collective knowledge of the novel on which it is based is sparse. If nothing else, this is a sobering reminder of the fleeting nature of fame. During the first two decades of the 20th century, L. Frank Baum was the literary equivalent of J.K. Rowlings. In 1900, the first of his Land of Oz series–The Wonderful Wizard of Oz–was published to great critical acclaim and financial success. Indeed, it remained at or near the top of the list of children’s bestsellers for two years. He would publish 13 more novels in the Land of Oz series.

But back to the movie version. As we all recall, Dorothy, having clicked the heels of her ruby slippers three times, awakes back home in her bed, surrounded by her uncle, aunt and the three farmhands (who, in Oz , were the Tin Man, the Scarecrow and the Cowardly Lion). The scene and the movie end with Dorothy uttering one of the most famous closing lines in film history: “Oh, Auntie Em, there’s no place like home.”

In the book, as in the movie, the Good Witch Glinda reveals the secret of her magic shoes. In the book, however, they are the Silver Shoes. After Dorothy clicks them together and makes her wish–“Take me home to Aunt Em!”–she awakes not in bed but “sitting on the broad Kansas prairie” near “the new farmhouse Uncle Henry built after the cyclone had carried away the old one.” Toto jumps out of her arms and runs toward the barn, barking furiously.

The final chapter, which is just three short paragraphs, reads as follows: 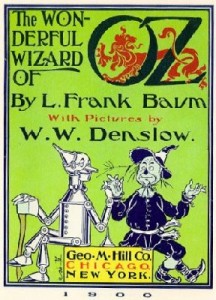 Aunt Em had just come out of the house to water the cabbages when she looked up and saw Dorothy running toward her.

“My darling child!” she cried, folding the little girl in her arms and covering her face with kisses. “Where in the world did you come from?”

Different mediums, different endings, but each well tailored to its medium.