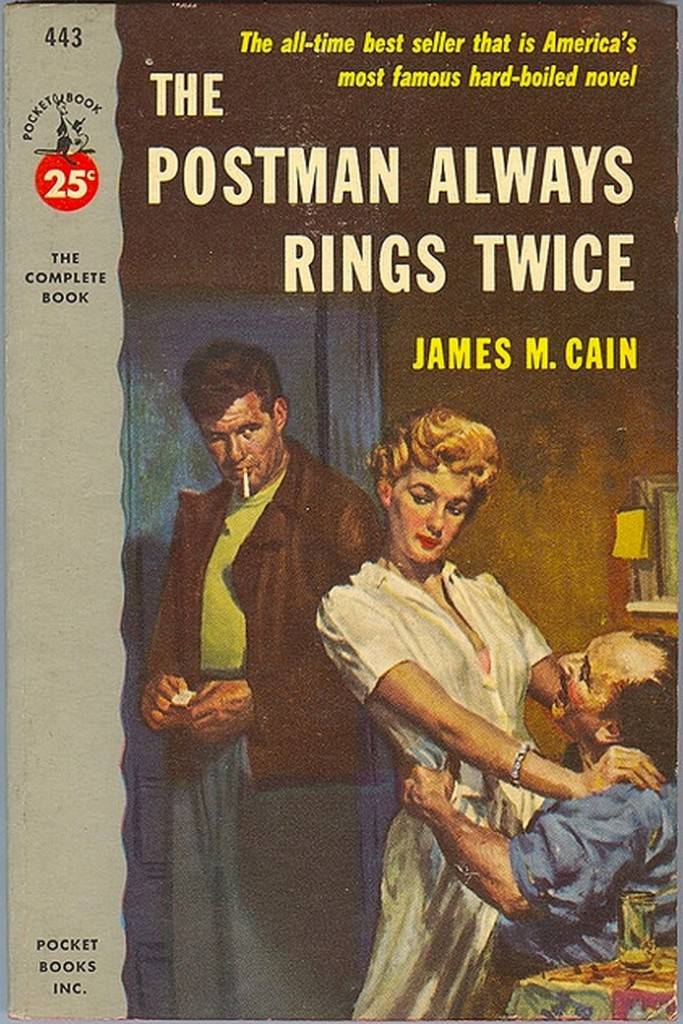 At least thirty years had passed since I first read The Postman Always Rings Twice by James Cain. I confess that during those intervening decades my memory of the short novel had faded into a vague recollection of a dark somewhat sexy crime story involving low-life hustlers that took place somewhere in California.

Oh, occasionally I would come across the title in articles and blog posts on great opening lines in American literature, where Cain’s opener–“They threw me off the hay truck around noon”–often made the list. But that was about it for me.

Until last week. While listening to an interview of mystery novelist Laura Lippman discussing her new novel, Sunburn, a book she acknowledged was inspired in part by Cain’s Postman, she spoke of her strong admiration for Cain and mentioned that she teaches his novel to her students in a writing course. 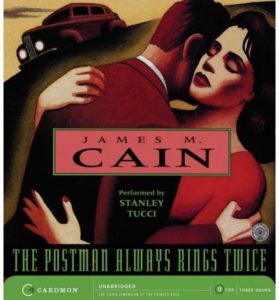 Great timing, since I happened to be looking for a good audio book for my commute to and from the office. A quick search turned up a version from Audible narrated by Stanley Tucci. James Cain and Stanley Tucci? That sounded like the perfect combo for a terrific listening experience–and its was, clocking in at just under 3 hours from start to finish.

Laura Lippman was right. The Postman Always Rings Twice is a gem of American literature. While we typically associate the American Noir genre with murder mysteries, such as those by Dashiell Hammett, there is no mystery here, although there is plenty of suspense in those 116 pages.  The book tells the story of a Frank, a drifter who takes a job at a diner and falls for the greasy owner’s seductive wife, Cora, who convinces Frank that getting rid of her husband is the only route to freedom and a better life. We readers follow the two protagonists through every stage of what they believe is their plan to commit the perfect murder. It fails the first time, appears to succeed the second time, but appearances can be deceiving.

As with so many great works of literature, the experience is so vivid and captivating that it’s hard to believe that the novel is more than eighty years old. From the crime to the sex, nothing feels outmoded or subdued. Here, for example, is Frank checking out Cora for the first time: “Except for the shape, she really wasn’t any raving beauty, but she had a sulky look to her, and her lips stuck out in a way that made me want to mash them in for her.” And he does indeed when she demands that he bite her and rip off her clothing.

So if you’re looking for a terrific short read–or short book on tape–I strongly recommend The Postman Always Rights Twice. And while there has been much rumination over the meaning of that title–especially since no postman makes an appearance in the novel–I’m fairly confident you will grasp its significance by the time you finish the book.