Somewhere toward the end of my recent blog posts exploring great opening lines and favorite narrators, I had one of those Homer Simpson epiphanies: to lure in your reader you will need more than just a snappy opener or a distinctive voice. Sure, both of those help. But the key is that opening paragraph. You need the magic occur by the end of the paragraph, preferably with an exit line designed to lure the reader into the next paragraph.

One of my favorite examples is from Dashiell Hammett’s Red Harvest. That novel opens not only with a distinctive voice (the unnamed Continental Op) and a terrific first sentence but with one of the most enticing opening paragraphs in American literature, including a perfect final line: 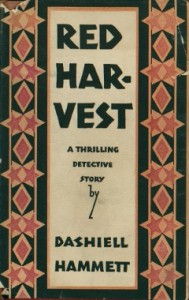 Dewey in the Big Ship in Butte. He also called his shirt a shoit. I didn’t think anything of what he had done to the city’s name. Later I heard men who could manage their r’s give it the same pronunciation. I still didn’t see anything in it but the meaningless sort of humor that used to make richardsnary the thieves’ word for dictionary. A few years later I went to Personville and learned better.”

It’s that exit line that seals the deal. You just have to read on.

Or take this opening paragraph from one of my favorite stories, Norman  Maclean’s “A River Runs Through It”:

“In our family, there was no clear line between religion and fly fishing. We lived at the juncture of great trout rivers in western Montana, and our father was a Presbyterian minister and a fly fisherman who tied his own flies and taught others. He told us about Christ’s disciples being fishermen, and we were left to assume, as my brother and I did, that all first-class fishermen on the Sea of Galilee were fly fishermen and that John, the favorite, was a dry-fly fisherman.”

Or this one from John Grisham’s latest novel, Sycamore Row–an opening that may offer insights as to why he sells more books in a week than I have in a lifetime:

“They found Seth Hubbard in the general area where he had promised to be, though not exactly in the condition expected. He was at the end of a rope, six feet off the ground and twisting slightly in the wind. A front was moving through and Seth was soaked when they found him, not that it mattered. Someone would point out that there was no mud on his shoes and no tracks below him, so therefore he was probably hanging and dead when the rain began. Why was that important? Ultimately, it was not. “

Pull down from your bookshelf two or three of your favorite novels and I’m willing to bet at least one, if not all, will feature a seductive opening paragraph.

They don’t teach you this in school–or at least not in any school I attended. I suppose we writers absorb that lesson by osmosis. And the lesson? To invert the final line from T.S. Eliot’s “The Hollow Men”: This is the way the novel opens: not which a whimper but a bang.

I took down several of my own novels from the bookshelf and, lo and behold, saw that I, too, had absorbed the Big Bang theory–literally, in fact, in my favorite opener, which starts Firm Ambitions:

1 thought on “Open With A Bang”