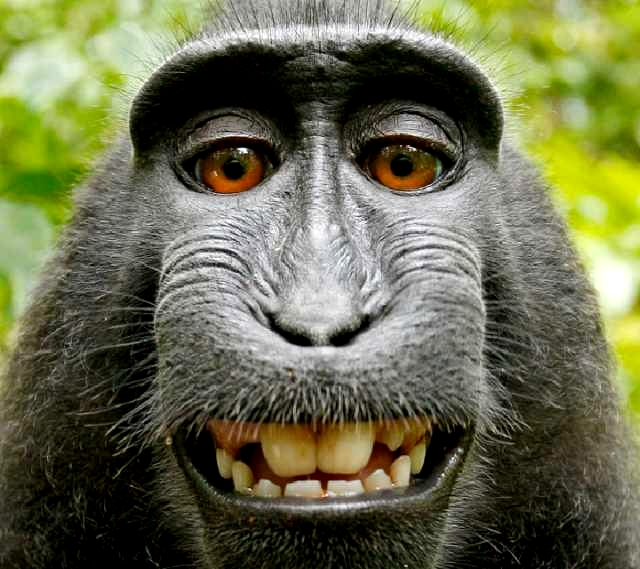 When you practice copyright law by day and write novels at night, you experience odd moments of convergence, the most recent of which involves the most famous monkey selfie in copyright history.

For those of you just returning to civilization after a ten-year sojourn in the wilderness, a “selfie”–as defined in the current edition of the Oxford English Dictionary–is “a photograph that one has taken of oneself, typically taken with a smartphone or webcam and shared via social media.” Within the past few years, millions of selfies have been posted on Facebook, Instagram, Twitter, and elsewhere. And while most of those folks do it for fun, selfies can be big business. The Huffington Post reported that Kim Kardashian will soon publish a book of 352 of her favorite snaps, which you can buy for $19.95.

Devotees of the selfie include President Obama, posing here with other heads of state: 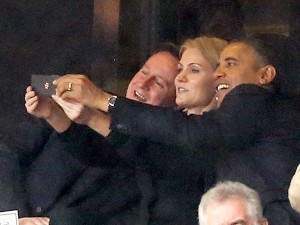 And Ellen DeGeneres during the 2014 Oscars broadcast, posing here with other Hollywood celebrities for what has been labeled the most famous selfie of all time. 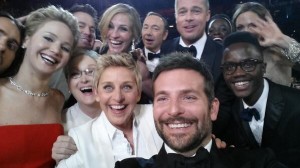 So where is this intersection of selfies and copyright law? It exists over the question of who owns the copyright in that photograph?

Rarely is that question an issue, even within the realm of selfies. Under the Copyright Act of 1976, the owner of the copyright in a photograph, is, in the jargon of copyright law, the “author” of that photograph, i.e., the photographer who snapped the picture. Ironically, the “author” of the famous Ellen DeGeneres Oscars Selfie, and thus the actual owner of the copyright in that photograph, is the actor Bradley Cooper. As shown in the photograph below (taken by someone else at the moment of the creation of that selfie), Cooper snapped the photo: 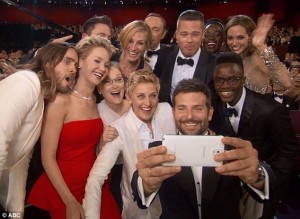 Recently, however, the realm of selfie copyrights took a far more intriguing twist. It all began in 2011, when British wildlife photographer David J. Slater was in Indonesia taking photos of macaque monkeys. 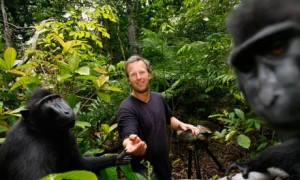 Some of the monkeys began playing with his digital camera, and one of the females managed to take a particularly striking selfie, shown at the top of this post.

That selfie went viral. It was published in various magazines and on websites around the world, including Wikimedia Commons, a collection of images that are free for public use. Slater apparently sent Wikimedia a standard copyright-notice-and-takedown request. Wikimedia, however, refused to take down the photo or pay Slater a royalty for it, claiming that there was no copyright in the monkey’s photo.

This raised an intriguing issue worthy of a law school final exam question: can a monkey be the “author” of a work that would otherwise be protected by copyright? Stated differently, is copyright ownership limited to humans?

That issue has caught the attention of the United States Copyright Office, which recently announced its release of the public draft of the Compendium of U.S. Copyright Office Practices, Third Edition, which will take effect by the end of the year. Buried within more than 1200 eye-glazing pages of administrative practices regarding the Copyright Office’s registration and recordation policies is Chapter 306, entitled “The Human Authorship Requirement,” which opens: “The U.S. Copyright Office will register an original work of authorship, provided that the work was created by a human being.”

Most ominous for our talented macaque photographer is the third paragraph of that chapter, which begins: “The Office will not register works produced by nature, animals, or plants.” Listed at the end of that paragraph are several examples of works not eligible for copyright registration, the first of which is: “A photograph taken by a monkey.” (The second example? “A mural painted by an elephant.”)

This not only means no royalties for our macaque but, alas, harbors an equally unrewarded future for that rarest of typing monkeys that has for decades–or, in other versions, for centuries–been the hypothetical second author of Shakespeare’s plays in the so-called Infinite Monkey Theorem. To paraphrase the title of that great country western song, “Mama monkeys, don’t let your babies grow up to be artists.” 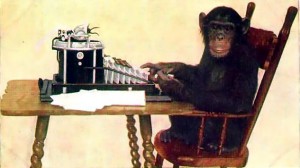